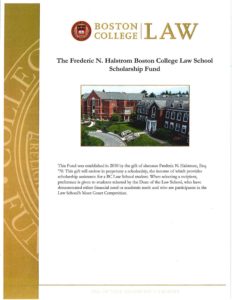 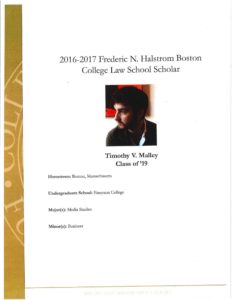 A message from Timothy V. Malley

I have worked in government since I was 18 years old. I eventually became frustrated with the relendess politicking it entailed, and decided that I wanted to further my education so that I would be capable of working to further government and society without getting bogged down by partisanship. I ultimately chose BC over Columbia, UPenn and UCL primarily due to the fact that I am a dyed-in-the-wool Bostonian, and also due to the generous financial support of people like you.

As a 1L, I have only had the chance to dedicate myself to a couple of student organizations, but with the first semester behind me and a better grasp on the demands of law school, I intend to involve myself far more in the future. I will be working in the area this coming summer, hopefully in a capacity that allows me to serve my Commonwealth and my fellow citizens.

Without your help, I would not be at BC. I will be graduating almost debt free, instead of being burdened by an oppressive six-figure debt which could take me a decade to repay. As someone trying to start a family this is an immeasurable gift, and one for which I hope I can thank you in person.